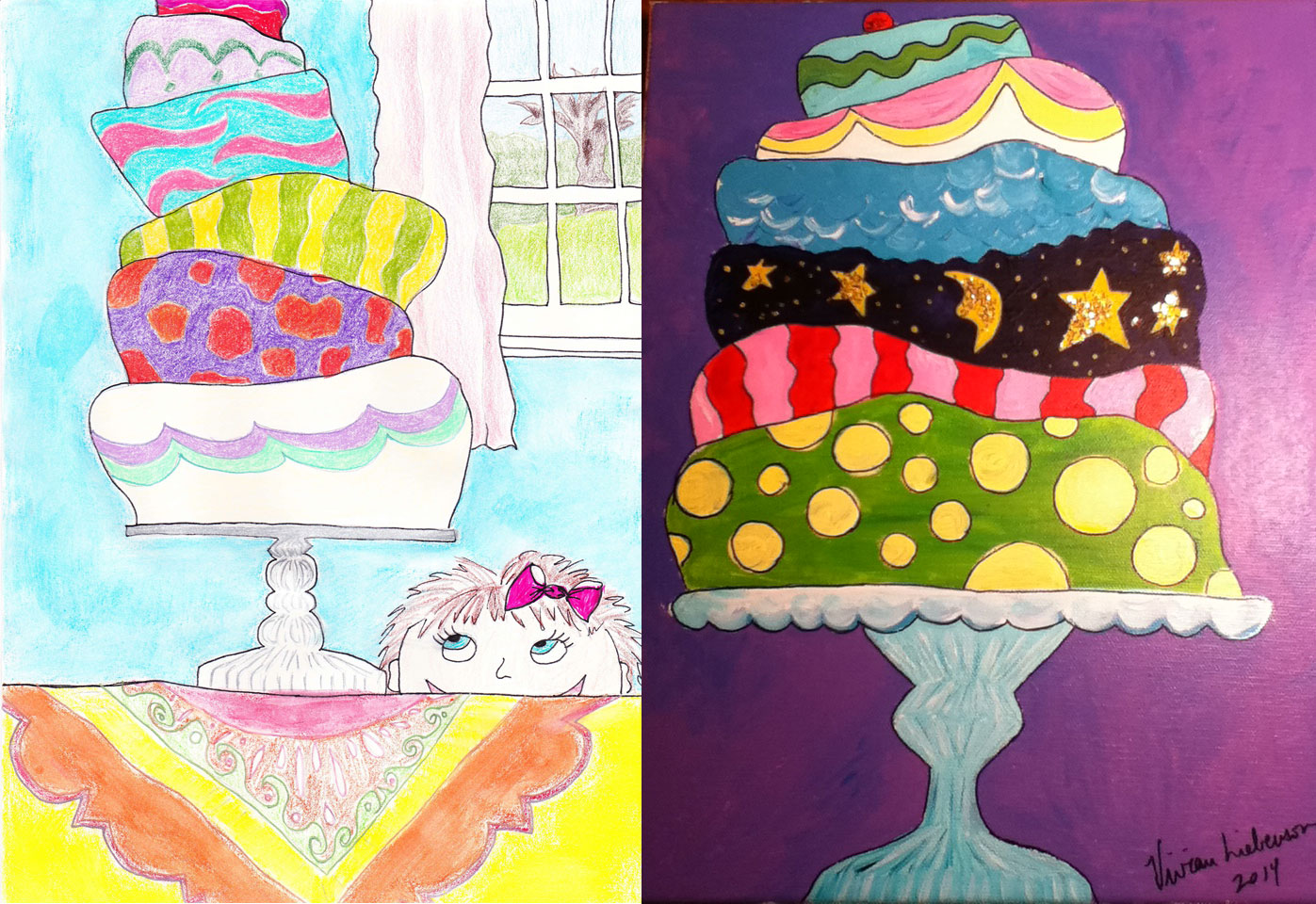 During my training as a Kaizen-Muse Creativity Coach, we were required to work on a creativity project. This was an open-ended learning experience designed to allow us to use the tools we were learning. There was no deadline or specific assignments other than to occasionally comment on how the experience was going or answer questions about it. The product was not the point. It was all about taking small steps, enjoying the creative process, and being able to maintain our own creative practice while coaching others on theirs.

When I started this program I was so completely stuck, I had barely done any artwork for the last 25 years since art school. There were the occasional gifts I made for family members, and a series of beaded necklaces I completed thanks to being on bed rest during a complicated pregnancy. But for the most part all I had were multiple sketchbooks overflowing with ideas to someday implement. Problem was I had no idea how to get from idea to finished product – no idea how to implement any of my ideas (this is especially hilarious if you know that my full-time job as a web designer is as a member of our company’s “implementation team”).

This was my mindset when we were asked what ideas we had come up with for our creativity project. I immediately scanned my sketchbooks and listed a bunch of projects I had been meaning to work on – a pendant, a children’s book, a collage that incorporates some plastic junk I had stashed away to use someday (just so you know, I am helpless to resist stashing away interesting pieces of plastic junk and containers to use “someday”). I was just excited I was finally going to get some help finishing starting these projects I’d been kicking around for years.

A funny thing happened, though, before I could even start sorting out my list of old ideas.

As we learned about the blocks creative people encounter and how to get past them, I started absorbing the lessons we were learning into my every day life. I discovered I had serious issues with perfectionism. Paralyzing fear of every piece of art not coming out perfectly, prevented me from ever starting. Or if I did start, and I liked where my work was going, the process became increasingly anxiety-ridden because the more I liked it, the more there was a chance of screwing it up before I finished.

As we learned about taking small steps – 5 minutes at a time if necessary, and lowering expectations – starting out “small and crappy” or doing intentionally bad work to get past the perfectionist fear, I found myself drawing a little bit every day and really enjoying myself. At night when I’d normally just sit down to watch TV I’d think, maybe I could just doodle for a few minutes. I might think, nah, I’m tired, but then I’d decide on just 5 minutes and set to work. Two hours later I’d still be doodling and coloring. 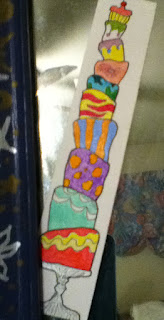 One the doodles I did was a very tall, lopsided cake on a strip of cardstock intended as a bookmark. I realized that I had so much fun drawing it, I could draw it over and over without getting tired of it.

I kept drawing that topsy-turvy cake until I realized I wanted to draw it bigger. So I drew it with a little girl staring up at it (top left image). And I loved how it came out! Suddenly it looked like a page from a children’s book and I was curious what was going to happen next.

Curiosity and wonder about your own work is always a delicious feeling.

It also occurred to me that my past ideas for children’s books (I have buckets of them floating around) never went anywhere because I always wrote the text and got stuck trying to illustrate them. I wondered, “What would happen if I just drew pictures I enjoyed and waited to see what story emerged?”

This new mindset was very encouraging. Unfortunately, only days after starting to look at things differently, old patterns took hold. I got caught up in the idea of churning out more drawings of the little girl in the picture, feeling certain she was the main character in this book I was now working on (because obviously if it could be a book, it had to be book).

It stopped being fun pretty quickly after that.

Luckily, a coaching session with my student coach (we were each assigned a student client and a student coach to practice with) brought me back to the memory of the fun I first had just drawing my cakes. I stuck my original bookmark up on my mirror as a visible reminder of where the fun had started and decided to just go back to doodling – I’m going to keep it small, I remember telling her.

And again – a surprise. I removed all expectations and found myself painting a much larger cake on canvas (top right image). I didn’t plan it or think about it. Just had an afternoon off and decided to paint.

I started it on Thanksgiving and worked on it a few minutes at a time, sometimes only every two weeks or so, until the end of February. I made huge mistakes and realized I could either fix them or I couldn’t. Maybe the painting would be ruined, but I’d still survive to paint another (they always were fixable). I also didn’t give up, as the pile of unfinished projects strewn about our house would suggest might be the likely outcome.

At the end I had one last decision to make. I knew I was just about done and felt like it could be the biggest mistake and would ruin the painting, or would be the finishing touch and I’d be done. I agonized briefly, summoned every ounce of audacity and nonchalance available, and went for it.

I outlined the whole thing in a heavy, cartoony, marker line and signed my name. It didn’t matter if it was good. The point was it had been fun, it was the product of lowered expectations and small steps, and after 25 years I had completed a painting again!

The truth was I did really like how it came out.

But I think the lessons I learned during the process were far more rewarding. Unrealistic expectations suck the fun out of being creative and make it feel like work. Small steps get you started, help get you unstuck, and move you past fear caused by perfectionistic thinking. And best of all, happy surprises, moments of pure joy, and wonder can be found in the creative process, if we embrace our mistakes, allow detours to happen, and avoid worrying too much about what the end result is going to be.

A Creative’s Guide to Surviving the Trump Presidency

Intuitive Painting and Discoveries in the Studio

Leap Into the New Year…But Bring an Extra...

Life-Cycle of an Idea

Hello there! I'm an artist, designer, illustrator, and creativity coach, and I want to help you be more creative. Whether you need creative inspiration and encouragement, help with graphic design or web design, or artwork to express your creativity on your walls, this is the place to be.

This website uses cookies to improve your experience. We'll assume you're ok with this, but you can opt-out if you wish. Accept Read More